How To Train The Biceps For Maximum Growth 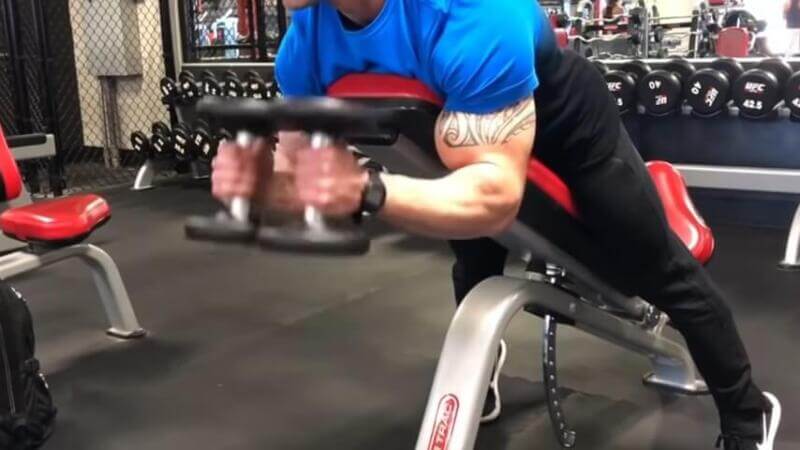 It doesn’t matter if you’re a beginner or a seasoned lifter everybody loves to train their biceps. It’s the one muscle that brings satisfaction every time you pump it. But how to train the biceps the right way for maximum growth is the question most people what an answer to?

It is not surprising that some people can get confused as to what the best way is as there are so many different methods to be utilized in bicep training – barbells, dumbbells, different angled benches, and various machines.

Go into any gym, and you’ll see most, if not all, of these methods used by various lifters. Still, even once you’ve figured out what methods work best for you, you’ll need to decide on the number of sets and reps. Is there a limit to how many sets you should be performing? Can the biceps, a relatively small muscle, be trained as hard as the back or the legs?

How To Train Your Biceps

In this article, we’re going to focus solely on the bicep. I know many arm articles love to include the tricep and forearm, but if you really want maximum results for your biceps, it is better to focus fully on your biceps when learning how to train them properly.

We just mentioned a few important questions that need to be answered regarding bicep training, i.e., what’s the best method, and how many sets. Still, before we can tackle any of them, we need to look at the anatomy of the biceps to understand it better and thus train it properly.

The bicep has two heads – inner and outer. Its primary function is to move the forearm and hand in towards the body. “Like any muscle, the method of training is simple – make it contract under resistance,” says Mike Antonino Former Mr. America

Be Careful Not To Overtrain The Bicep

“Problems, though, can arise quickly. As it is such a small muscle, we tend to overtrain the bicep, ” says Antorino. One reason is that it is indirectly incorporated into a great deal of our training for other body parts. For example, you’ll still feel a slight pump in your biceps when you train your shoulders and perform movements such as strict side laterals and upright. , Okay, “it’s not the same sort of pump you’ll get from doing dumbbell curls, but it’s enough to make you aware of overtraining,”

With this in mind, you need to be intelligent enough to realize that we can’t do 20 sets for our biceps. You must take into account all the indirect work our biceps receive while we train other body parts.

As most people know, there is a lot of controversy, even among bodybuilding experts, regarding the number of sets and reps to be performed for the biceps.

“The majority of people considered to be bodybuilding experts claim that 6-12 sets per training session will provide for maximal muscle growth,” says Antornio

There are many die-hard 20 plus set bicep nuts out there who argue you can not develop good biceps from just 6-12 sets. But if you give those 6-12 sets everything and concentrate solely on the movements, you will stimulate your biceps into great growth.

Putting everything you have into a movement doesn’t mean just trying to lift as much weight as possible. It also means that the movement should be executed in strict form and that the positive and negative parts of the exercise should be utilized. ” This controlled lowering of the weight – commonly referred to as negatives – will add an unbelievable stimulation to any arm movement,” says Antorino

The 3 Bicep Exercises You Should Be doing

Remembering the prime function of the biceps brachii (to supinate the wrist), we will use a regular barbell for our standing barbell curls. Grasp the bar with a shoulder-width grip, and without any hip movement, contract the biceps until the weight is at your chin. Hold this contracted position for a two count before lowering the weight slowly back to the sitting position. Repeat for at least eight reps, and then run to the chin-up bar for your next exercise.

This is the compound part of the pre-fatigue cycle, calling upon the relatively untaxed muscles of the back and shoulders to aid in forcing your biceps to continue contracting beyond normal failure. It is advisable to get yourself a set of wrist straps for this exercise (particularly when using pre-fatigue), as you will find your forearms get quite a workout in addition to your biceps,

Grasp the chin-up bar with your hands spaced about 4″ apart. Slowly contract your biceps until your hands touch your shoulders (or as high as you can pull up), hold this contracted position for a two count, and then lower yourself in four seconds back to the starting position. When you can perform 12 reps in good form, add 15lb to your waist and try at least seven reps again. If some of you cannot perform at least eight chin-ups after the barbell curls, do negative only chin-ups. That is, climb on a chair until you are in the fully contracted position of the exercise and then concentrate exclusively on lowering yourself back to a fully extended position. Try to make each decent last eight seconds. (the same rep protocol may be followed for negatives as for the positives). 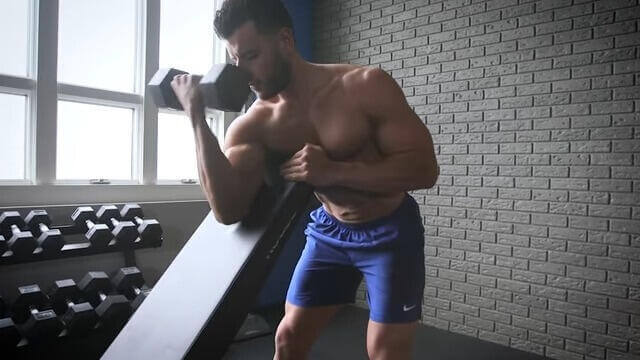 After a brief rest (1-2 minutes) prepare for the final bicep workout exercise, dumbbell preacher curls. The bench should be steeply angled to ensure resistance is supplied in the fully contracted position of the movement. I would advise performing the movement unilaterally or one arm at a time. In this way, the neurological efficiency is not compromised by channeling its current into both arms, and a greater percentage of contractile fibers in the biceps brachial are available for activation.

From a position of full extension, slowly curl the weight up to your shoulder. When the weight is at the apex of its accent, try to exaggerate the supination of the movement by twisting your palms towards the ceiling. Hold the contraction of a distinct pause and then lower the resistance (four seconds) back to the starting position of full extension. Your biceps should be considerably swollen by this stage, but you still have one more set to perform. And do remember to carry every set you do to the point where you cannot contract your biceps even one inch. This increases the severity of the exercise and, consequently, its productivity.

The Six Principles of BodyBuilding Success

1) Rest no more than two minutes (maximum) between straight sets.

2) When pre-fatigue is employed, do rest at all between sets. Even as little as three seconds will allow you to recover up to 50% of your strength, thereby rendering the principle of pre-fatigue inoperative.

3) Carry every set to at least positive failure (i.e., that point in a set where another repetition is impossible despite your greatest effort).

4) On lower body exercises, select a weight that initially allowed only 12 reps, now yields 15, and increase the resistance by 5%

5) On upper body exercises, select a weight that will just allow you to complete eight reps in good form. When a weight that initially allowed only eight reps now yields 12, its time to increase the resistance you are using by 5%

If this bicep routine is followed under the guidelines above, you will notice a significant increase in your arm girth. To add size, use this routine plus a well-balanced but calorie-increased diet. For definition, use this routine plus a will balanced but calorie-reduced diet (in addition to aerobic exercises during your non-workout days). Should you find yourself getting weaker, or having trouble recuperating between workouts, cut your weekly workouts down to two (e.g. Monday and Thursday), as this will provide additional recovery time that your body, in this instance, will need. 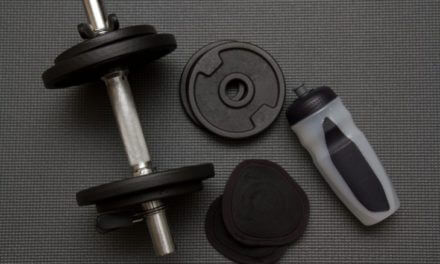 9 Tips To Get In Shape 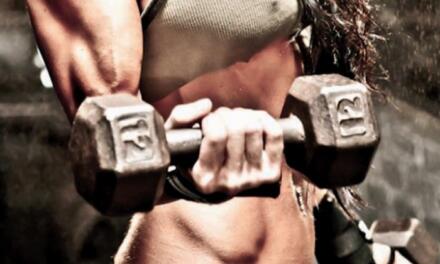