When you buy a budget spin bike, you can’t expect advanced features such as magnetic resistance and fancy monitors. Still, what you can find are a few well-built impressive exercise bikes.

And one of those impressive spin bikes is the VIGBODY exercise bike. And what’s great about this bike is that it gets all the essentials right such as a heavy-duty frame, whisper-quiet belt drive system, a surprisingly heavy 35lb flywheel, and a large weight capacity of 330lb.

The Vigbody Exercise bike offers all you need for intense calorie-burning workouts without breaking the bank. Yes, it’s a long way of commercial-grade, but when you consider you’re playing under $300, it’s a lot of bike for your bucks. 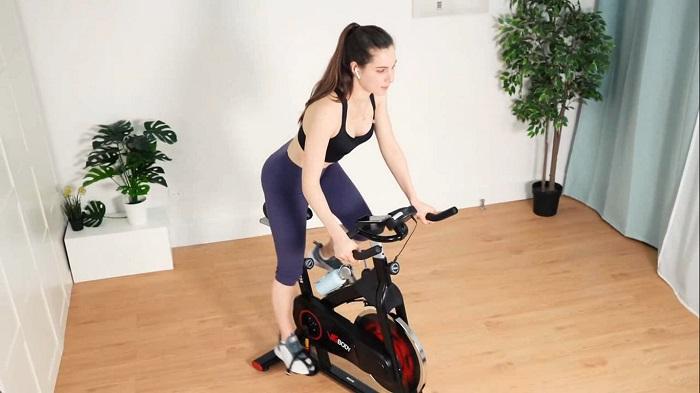 Folds for storage – no

The best feature of the Vigbody HL-5230 has to be its belt drive system. Belt drive systems are usually found on higher-priced spin bikes, so it was a nice surprise to see one featured on a spin bike under $300.

What so good about a belt drive? A belt drive is almost silent in operation. And it doesn’t require any maintenance. Typically we see chain drive systems on bikes in this price bracket, and although there’s nothing wrong with a chain drive, they do the job well; they are noisy because the chain has to go over a sprocket.

As well as being noisy, chain drive systems also require lubricating once in a while, similar to an outdoor bike.

So if you want to cycle without disturbing yourself or others around with the sound of your workouts, and you want as little maintenance as possible, it’s always best, if budget allows, to choose a spin bike with a belt drive system.

Stability – Can Be An Issue With Entry-Level Indoor Bikes

Stability is something many people overlook when choosing an indoor bike, which is a mistake as it’s more important than you think, especially if you want to stand while cycling.

Stability is usually a much larger problem the less money you spend. Why? Because the frames are lighter. Thankfully we dont have a super-light frame with the Vigbody exercise bike. It weighs close to 80lb which isn’t bad at all for the price point.

However, the Vigbody bike will not feel rock solid like the commercial bikes you would use in your local gyms; those things weigh 150lb+, but the 80lb weight of the bike plus your own bodyweight should keep Vigbody stable enough for out-of-the-saddle cycling.

Also, we have a very handy feature to keep the bike level on uneven floors, and that’s the adjustable feet levelers. These things are excellent and independently adjust to irradicate any wobble if your floors are uneven.

And lastly, we have nice wide stabilizers at either end of the bike; they’ll prevent any chance of the bike toppling when in use and also help to prevent wobble.

Some movement is unavoidable with cheap spin bikes. They just dont weigh enough. Still, for the price, I think Vigbody has done all they can when it comes to stability. If you want a rock-solid heavy-duty spin bike, you’d be looking at paying at least 3 times more than the Vigbody.

For the price bracket, the Vigbody exercise bike is about as stable as you will find, so a thumbs up from me!

Basic – Easy To Use Monitor

As I mentioned earlier, you’ll never find an advanced monitor with an HD screen in this price bracket; all we can hope for is something that’s easy to use and read that’s doesn’t take much time to set up.

And the Vigbody monitor is all of these things. It’s super easy to use, setting it up takes a minute, and the LCD is easy to read. The monitor tracks all your usual workout data such as time, distance, speed, and calories burned.

Slightly disappointed to see the bike only includes a phone holder rather than a tablet holder. Still, they come cheap. A tablet holder costs around $15 which you attach to the handlebars, handy if you’re going to use the bike with fitness apps.

The Vigbody features friction resistance; it isn’t a deal killer by any means. Friction resistance works just as well for intense workouts as magnetic. Plus, it’s basically impossible to find a decent magnetic spin bike in the under $300 price bracket.

Friction pads provide strong resistance, just like a magnetic spin bike. The only difference is a friction pad will make more noise because the pad makes contact with the flywheel, and the pad wears over time, so it will need to be replaced every 6 months or so.

The noise friction resistance makes isn’t anything off-putting it’s a faint whooshing sound, you’ll still be able to watch Netflix, etc., and it’s not loud enough to disturb others around you.

When it comes to wear and tear, the friction pads are easy to replace its take a few minutes, and are cheap.

A little tip – if you want your friction pads to last longer, lubricate them when you see they are starting to fray. Lubrication can add an extra couple of months to the life of a pad.

The only real drawback of friction resistance is that it uses a tension knob to change resistance strength.

While tension knobs are easy to use, it doesn’t change in small enough strength increments to make the bike suitable for apps such as Peloton (Peleton trainers ask for micro-adjustments of resistance strength)

Heck, it’s not impossible to use a friction resistance bike with the Peleton app, but if you want to get the most out of the Peloton app, Id recommend a magnetic spin bike as they have micro resistance levels.

Resistance Strength – This is a budget bike, so it’s not suitable for serious cyclists. It’s targeted towards beginners or anyone who will spend a few hours a week burning off some calories trying to lose weight.

It’s not a pro bike by a long way. However, we have a nice heavy flywheel, so resistance strength in the upper levels will feel strong. Not only that, the heavy flywheel will allow for a smooth un-jerky cycling motion which is exactly what we are looking for, for long spinning sessions.

Will The Vigbody Exercise Bike Fit Me?

As the handles bars do not move backward and forward, it can be a slight stretch for shorter users, so a rough estimate for the VigBody bike would be – for comfortable fit a height between 5ft – 6’1″ . This isn’t a large bike its a small and compact, anyone over 6’1″ will have an issue I feel. One guy said it was way too small for him, and he was 6’3″

6’1″ is normally the max height of budget bikes with these measurements.

You’ll be happy to here the Vigbody is easy to assmebl most of the bike comes preasembled tools and manual are provided. Average build time is under one hour.

If you get stuck at any point you can always check the video at the start of this review.

Easy to use monitor

Easy to assemble, under 1 hour

There’s nothing too much to fault about the Vigbody Exercise Bike. I love that they have included the belt drive system on an entry-level bike as it makes the bike perfect for indoor use, with no noisy chains and no maintenance.

I also loved the heavy flywheel. A 35lb flywheel on a budget bike is impressive and excellent for providing that smooth cycling motion we want from an indoor bike.

Yes, it’s an exercise bike suitable for beginners, but with a 35lb flywheel and a belt drive system, this thing will appeal to intermediates as well.

We have to remember nothing in this price range is perfect. I’ve heard a few stories of the pedals coming off on the Vigbody bike, but that’s usually down to them not being tightened properly. Apart from that, some may find the seat uncomfortable.

Uncomfortable seats can easily be solved as you can either change the whole seat or buy a seat cushion. However, make sure you give yourself time to get used to indoor cycling before deciding to buy a new seat or cushion. First-timers always complain of uncountable seats; it’s something you will get used to.

Overall the Vigbody is a good choice for beginners or anyone looking to burn off some unwanted belly fat. An excellent low-impact alternative to a treadmill. 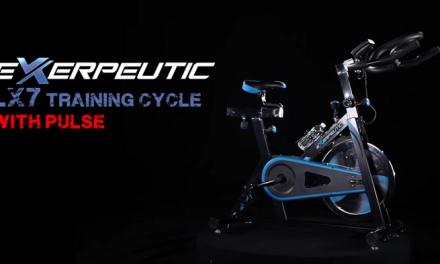 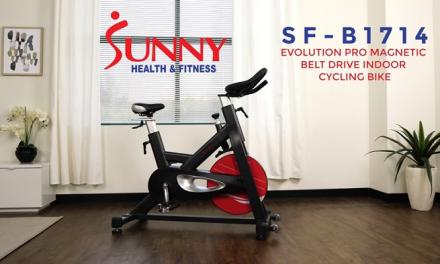 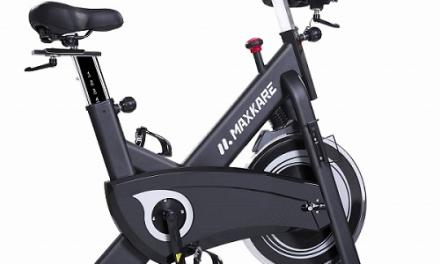